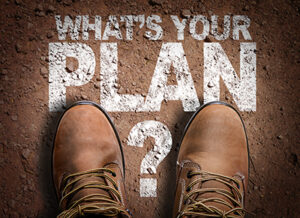 What good is knowing the destination if you don’t have a plan to get there? I enjoy going out into the backcountry and exploring trails, taking road trips to see National Parks

We recently consulted with a family-owned remodeling business in Orange County where the owners were a husband and wife team and the son was contemplating joining the business. He reached out to us in distress because he wants to help his parents, but they were unwilling to listen to his input and suggestions.

His parents wanted to retire in the next few years, but the business was a mess, proposals and quotes were handwritten and constantly misfiled, customer appointments were being missed because the calendar shorthand wasn’t standardized, and it took months to be paid on jobs because invoices were sent out incorrectly and lacking information.

Our guess was that they probably haven’t taken more than a long weekend away from the business.

He laughed and said “a long weekend! They can’t even take an afternoon off! If they aren’t there, nobody knows what to do or how to do it because they don’t know where any of the information is.”

His parents had a goal to retire and have him take over the business, but they were so busy working in the business (over 150 hours a week between the two of them) that they had no time to put a plan in place. They were not aware that trying to replace two full time owners in a business makes a business much more difficult to sell than if there is one owner. They were not aware that a buyer will not pay top dollar for a business if the records are a mess and there are no clear organizational systems in place. Yes, their situation is different because they want their son to take over, but are they handing over a business that he can even take over?

People often say that consistency is key, which is absolutely true. You need to show up and fight for your business every day to keep it moving forward and in this case, they have been in business for over 25 years! It only then becomes apparent that consistency is only half of the equation. If you are consistently just showing up and doing the work, the chances are that you are reacting to problems in the business rather than driving the business forward in the direction of your choosing.

As our conversation was coming to a close, we exchanged some ideas on how the business could improve, and he was able to walk away with some key points and ideas to pitch his parents about the business. The good news is that they have time to put a plan in place in order to execute their goal, but not everyone is so lucky. Hopefully, his parents are open to change and they can

Do you have an exit plan in place for your business? What are you consistently doing to reach your goal? When we take a business to market, the business that sell for the highest possible value is the one that planned and consistently executed their roadmap to retirement.

We Couldn’t Be Happier

"When we thought about selling we had no idea what our business was worth or how to go about selling. What you were able to do was to cut through the fog so that we understood the valuation issue and had a comfort level with the process. As you know we ended up selling for somewhat more than the original valuation and we got all cash and our CPA loved the way our tax liability was minimized. We couldn’t be happier!"

"Our first contact with you shocked us when you suggested that we wait 18 months before selling because you believed that if we hit our projections that the value would be significantly greater. As it turned out we not only followed your advice but also got slightly over $250,000 more than we originally had hoped for. It is seldom that we have had the opportunity to deal with a firm that doesn’t want both money and a commitment NOW. It was clear and obvious that you had our best interests at heart."

You Got the Valuation We Agreed On

"You did a great job on the sale of our business in really beating the bushes for buyers, including a UK company that was an active suitor. You managed to get the valuation that we had all agreed upon and got it substantially all in cash and got the transaction closed with little to no problems or expensive lawyers involved."

Thank You for Handling Our Business

"Our business was smaller than what your firm normally handles but it was a BIG part of our net worth and savings. Thank you for handling our business and we were very pleased and delighted with the results."

"Our transaction was involved as we had different corporate entities located in different states. Our only regret is that we didn’t retain your services before 2012 when we paid $25,000 to a firm in Texas that did a valuation and market analysis for us before then failing to do anything in the way of trying to sell our business. You got it sold for more than anticipated."